I've been on a bit of a hot air balloon kick lately - it's been so cold here that I'm very ready for spring and everything that comes with it. Easter is less than two weeks away, so I thought these Easter egg hot air balloons would be a perfect way to celebrate both spring and Easter! Because a hollow plastic egg is used as the balloon, you can fill it up with candy and give them away as little Easter presents for your friends and family! 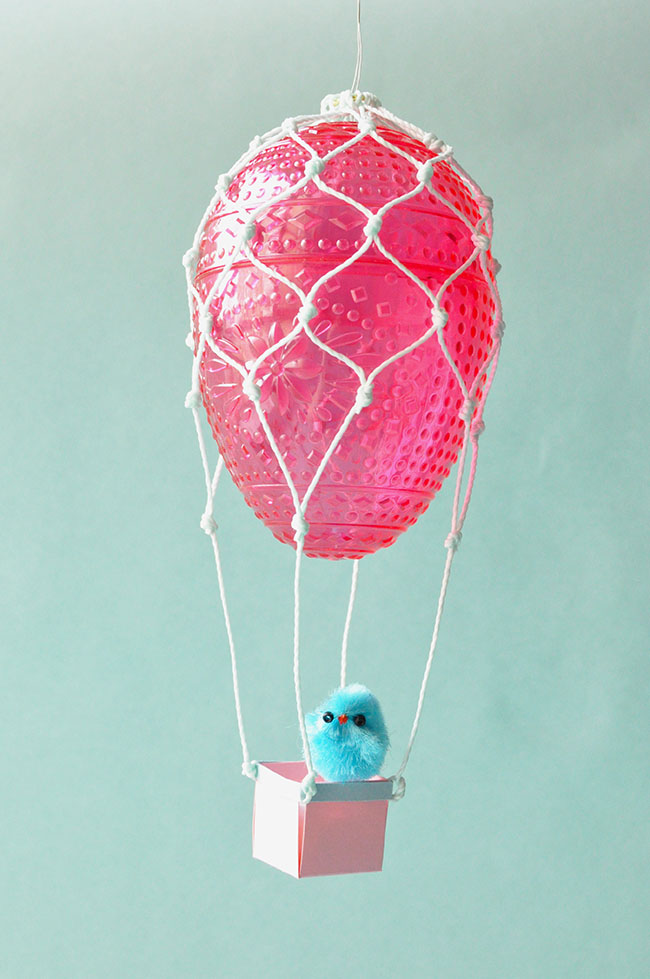 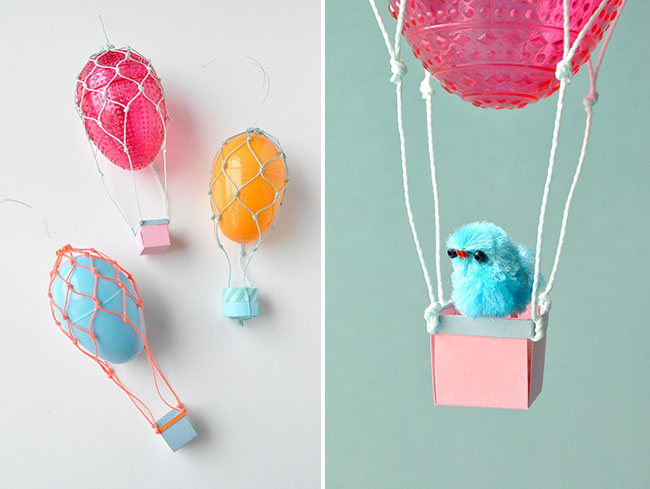 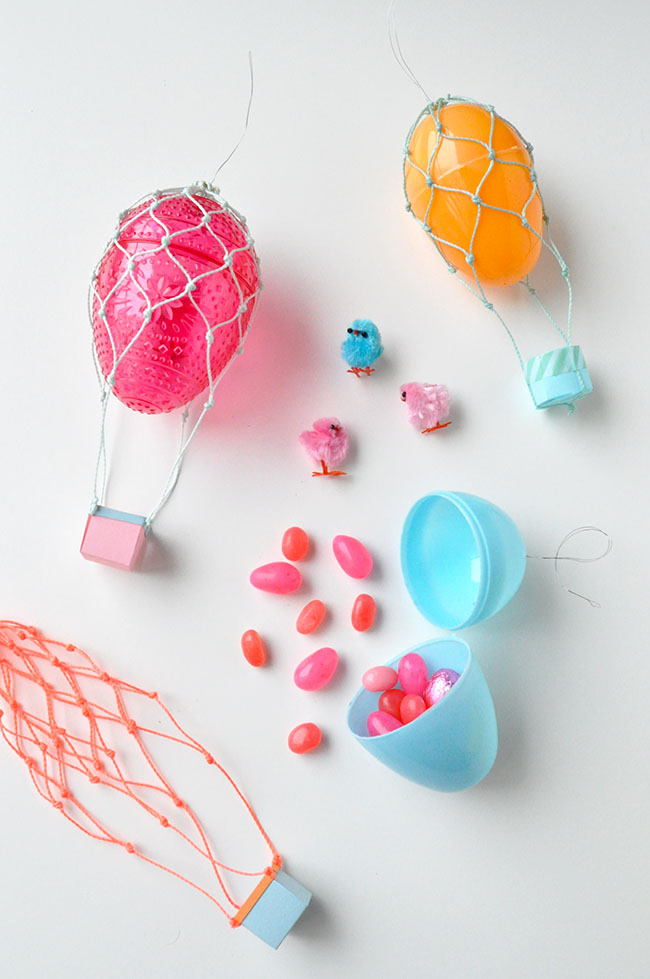 Step 1: Cut a piece of wire about 12" long. Almost all plastic eggs have two small holes on each end - if not, use a drill with a super fine drill bit to make your own. On the fat end of the egg, thread one end of the wire through one of the holes and the other wire-end through the other hole; this forms a loop on the outside of the egg. On the inside, twist both the ends together securely.
Step 2: Cut eight lengths of twine each 32", but then folded in half at the centre.
Step 3: Thread 1"of the folded centre of one of the strings through the jump ring. Pull the two tail ends through the string loop and pull taught.
Step 4: Repeat for the other seven strings.
Step 5: Take one strand from one knot and the neighbouring strand from the next knot over and use an overhand knot to tie them together 1/2" from the jump ring.
Step 6: Repeat for the rest of the strands and then start another tier of knots, again taking strands from separate neighbouring knots to tie together.
Step 7: Continue doing this, adjusting the distance between knots if desired.
Step 8: Slide the jump ring over the wire loop on the egg. Once you are happy with how the net looks on the egg, move on to the next step. 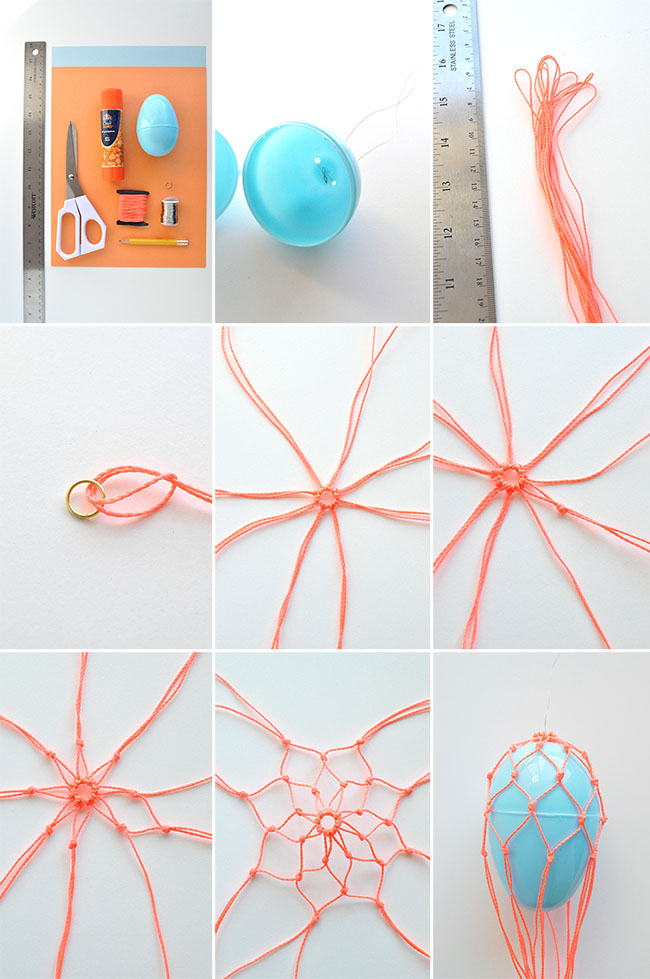 Step 9: As before, tie two strands from neighbouring knots together 1 1/4" away from the previous knots. This time though, cut off the single strands that were not used in the most recent knot.
Step 10: Repeat this for the next two knots, and then twice more for the rest. On your most recent tier, you should now have 4 knots with 2 strands on each. Cut off one strand from each of these lower-most knots so that only four strings are hanging down.
Step 11: Time to make the basket! On card stock, draw 2 1/4" by 2 1/4" square made up of nine smaller squares, each measuring 3/4" by 3/4". On another colour of card stock, draw a strip 1/8" by 3 1/2" long. On this strip, use your ruler to make a tick mark every 13/16" so that there are four sections with a bit of extra left at the end. (Sounds complicated, but the idea is that each of the four sections on the strip are very slightly longer than the 3/4" edges of the basket.)
Step 12: Cut out the four corners of the square and fold along the remaining lines. Fold the strip along the tick marks you just drew.
Step 13: Use your glue stick to attach the thin strip to the top edge of the basket - there should be tiny gaps along the vertical edges of the basket as shown below. The leftover bit of the strip will overlap onto the first piece you glue - this will hold the basket together.
Step 14: Thread each string through a corner of the basket. Double knot the string to itself 1 3/4" down from the previous knot. Remove the Easter egg, fill with candy, and replace. 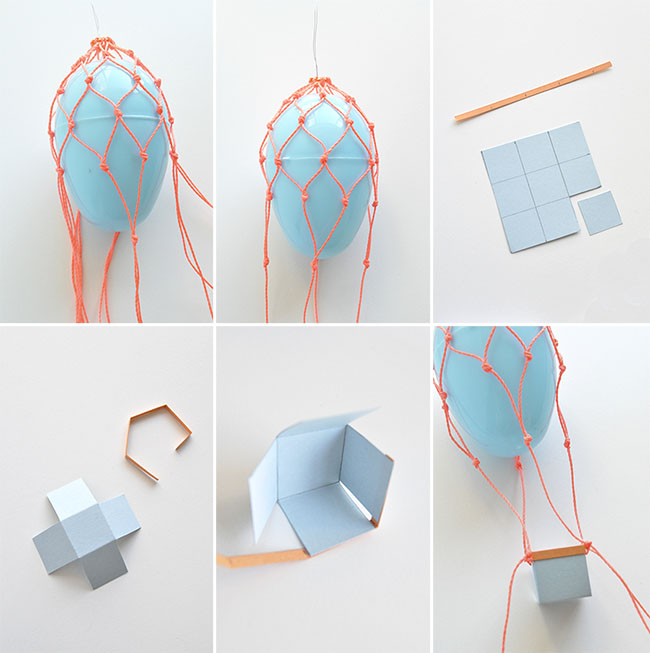 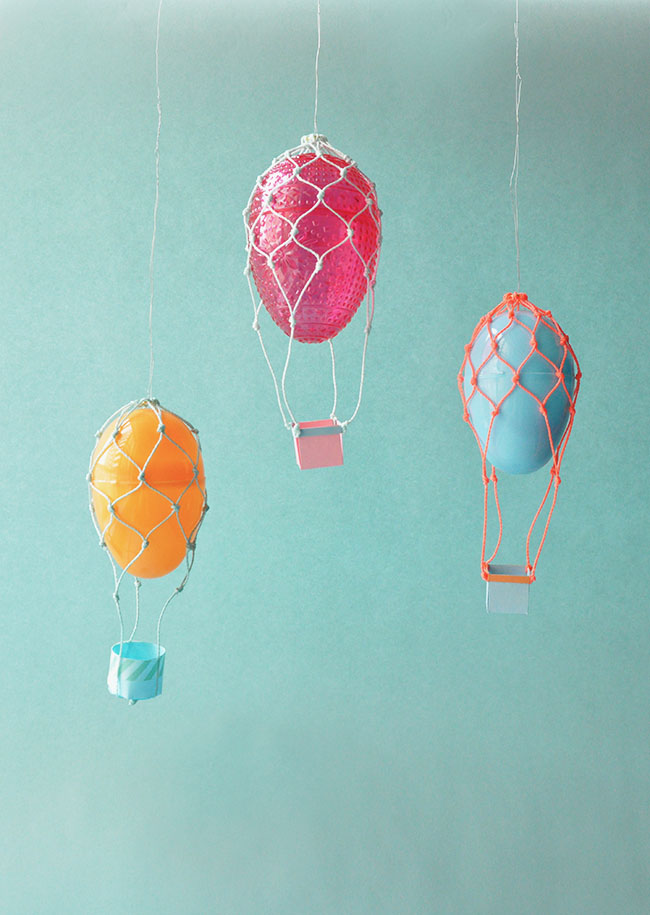